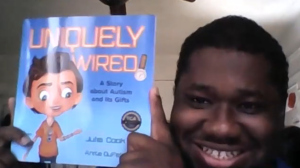 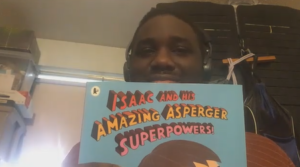 During National Autism Acceptance & Awareness Month, two members of Birch’s New Frontier program were invited to read to pre-schoolers at the Pelham Bay Early Childhood Center in the Bronx. Alex and Ajuwon jumped at the chance. As members of New Frontier, the two young men have become proficient self-advocates and are happy to speak about their autism whenever an opportunity arises, especially when it’s a chance to connect with young kids also on the spectrum.

In April, Alexander read Elizabeth Ryan Peete’s My Brother Charlie, a story about a boy with autism. Charlie’s brain works in a special way. It’s harder for him to make friends or show his true feelings. But as his sister, Callie, tells us, “for everything that Charlie can’t do well, there are plenty more things that he’s good at.” Alexander told students that he found a lot of similarities between himself and Charlie. Speaking of the connection he felt between himself, the story, and the students at PBECC, he said, “I love reading to little kids! I like talking to them about autism and sharing my own experience.”

The following week, Ajuwon read Julia Cook’s Uniquely Wired: A Story About Autism and Its Gifts, the illuminating story of Zak, a young boy living with autism who wants you to understand how he experiences the world around him. Bright lights, big crowds, even hugs make him anxious. His “strange” behaviors, from flapping his arms to spinning his body, seem so out of place. But for Zak, that’s just how he copes. “I’m a lot like Zak,” says Ajuwon, an alumnus of Birch’s Phyllis S. Susser School for Exceptional Children. “I do what I have to do and I don’t let anything keep me down. I hope that hearing me read this story made the kids feel that way, too. They should never give up!”

“It was such an amazing gesture of kindness from Alexander and Ajuwon to provide a glimpse into the possibilities and probabilities of success all the children in our programs share,” says Principal DeAnna. “Families were able to look to their own future with their children and see great things are achievable.”