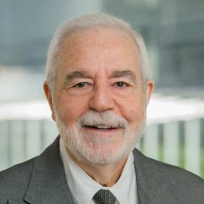 Dan chaired the investment banking department of a 250-attorney law firm before becoming counsel in the New York offices of Scarinci & Hollenbeck. He is a nationally known author and lecturer who has written and presented on topics relating to private and public securities offerings, and other corporate, securities and investment banking matters. Dan has been a member of the Board of Directors of Birch Family Services for more than 25 years, serving as chairman from 1996-2006. “My son has been a beneficiary of Birch’s services for most of his life from age five,” Dan said, referring to his adult son Michael. “Birch provided him with job training which led to a part time job of which he is quite proud.” Dan has appeared on CNN and in numerous other national and local television and radio media outlets. His articles have appeared in Barron’s, The American Law Institute – American Bar Association’s The Practical Lawyer, Boardroom Reports, Bottom Line/Personal and in a number of other professional and general circulation magazines and newspaper publications.  He has authored or co-authored several chapters of books published by Matthew Bender & Co. Dan is a product of the New York City public schools, City College and Fordham University Law School.