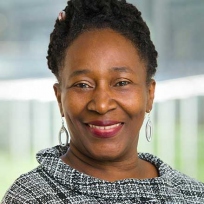 Georgiana has worn many hats at Birch Family Services leading to her role now as a member of the Board of Directors. She has been affiliated with Birch since 1999 when she enrolled her son Kimani in the Head Start Integrated Program. The services provided through the program made a huge impact on Kimani’s growth and development, which led her to bring her two daughters to the program as soon as they were eligible to enroll. Always an advocate for Birch, she helped bring new parents to the program and served as the treasurer on the policy council. As her children transitioned out of the program, Georgiana made sure they did not forget their Birch family. Every year they would return to support literacy by reading books to the children in the programs they had once been in themselves. Georgiana also took an active role in her children’s public schools by becoming an advocate for early intervention services. She also served on the PTA executive board as its treasurer. An exceptional cook, Ms. Magloire’s talents in the kitchen have resulted in her taking her accounting and business background to open her own business – Althea’s Tropical Delights LLC. Today, Georgiana and her husband are the proud parents of three confident young adults.